Author Joshua Davis tells the true story of four undocumented teenagers from an impoverished section of Phoenix, Arizona who build a ragtag robot nicknamed “Stinky” out of spare parts to compete in a national robotics championship against the likes of MIT among other prestigious, well-funded universities.  This brave and unlikely team combats more than their competitors.  They also fight the vehemence of anti-immigrant sentiment, laws designed to prevent their advancement in society and a pervasive fear of deportation.  Even so, they deal with typical teenage issues of insecurity and fitting into high school culture.   They find their way with the support of each other and the backing of two teachers, Fredi Lajvardi and Allan Cameron.
This story first appeared in Wired Magazine in 2005 where Davis wrote about Oscar Vasquez, Lorenzo Santillan, Christian Arcega, and Luis Aranda, the four teens who possessed a sizeable amount of grit, determination, charm, and an endearing adolescent awkwardness. Since publication, the article has attracted the attention and wonderment of readers drawn to a story of the underdog, a story that feels simultaneously mythical, real, and as elusive as its premise, the American Dream. Though that tale is entertaining and inspiring, this book resounds most when it uncovers intersections of how law and policy affect the everyday lives of undocumented students, students who are more American than Mexican in this case, students who have spent the better part of their lives growing up in the US.
At various points, the boys and their teachers are confronted with a harsh reality of laws enacted to limit the boys’ ability to move freely, drive a car, enlist in the armed forces, go to college, and find desirable employment that matches their levels of education and intelligence. On a trip back to Phoenix where they visited a San Diego based ROV manufacturer to improve their robot in time for the competition, their van is stopped unexpectedly at an immigration checkpoint on I-10 near Yuma, Arizona.  As Oscar imagines being torn from his family, the agent waves them on across the border.  Davis writes “suddenly, their desire to see the ocean and learn more about robots seemed foolish and maybe even a bit reckless.” 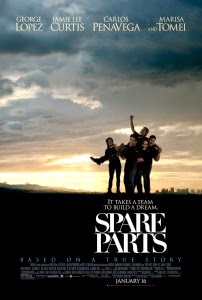 Ten years later, a movie version will be released on January 16, 2015.  It’s with little doubt that the Hollywood film will capture well the underdog theme which is both entertaining and inspiring.  (A film review by us is forthcoming). What is not as uplifting is what happens to the boys after the competition, what happens as they become men.   To be sure, they lose none of their integrity, but we as a nation are implored to ask ten years later, with respect to our immigration laws and policy, have we?

Sign up to stay connected with our updates on education and immigration as well as learn about our community grants program.  Follow us at twitter at thnkimmigration @immcouncil #teachimmigration
Posted by Unknown at 12:50 PM