A New Resource for Addressing Some Concerns of Immigrant Students


As teachers and school professionals, we know you are a trusted guide for your students, and in particular, some of your more recently immigrated students may share questions and concerns with you that you may feel like you need more information to address. These concerns may require extra support perhaps requiring students to seek mental health counseling and legal assistance.

The U.S. Department of Education recently published a resource guide for educators to support undocumented youth with a focus on secondary student access to higher education. It is estimated that about 65,000 un­doc­u­mented stu­dents gradu­ate high school each year, but only about 54 per­cent of all un­doc­u­mented young people have a high school dip­loma, com­pared to 82 per­cent of those born in the U.S. Included in this guide are: tips for school personnel to welcome immigrant students and their families into the classroom; information on de­ferred ac­tion for child­hood ar­rivals (DACA); (which of­fers some young people a tem­por­ary re­prieve from de­port­a­tion and opens ac­cess to some jobs and schol­ar­ships); successful school models that address specific immigrant student needs; and information on scholarships available for undocumented students.

One thing to remember is that all students, regardless of immigration status, are guaranteed by law a right to a free public education under the 1982 U.S. Supreme Court decision Plyer v. Doe. The U.S. Department of Education issued a fact sheet for schools on educational services for immigrant students and those recently arrived in the U.S., and together with the Department of Justice, published a joint guidance letter , fact sheet and Questions and Answers reminding school districts of their federal obligation to educate all students residing in their respective district and how to enroll them.  A student’s immigration status isn’t something that teachers can or should inquire about and school staff are prohibited by federal law from taking action that may intimidate or “chill” immigrant students from attending school.

We will continue to support your work to teach about immigration critically and thoughtfully with all students with our free lesson plans and resources and to support your immigrant students.

Please help us to disseminate this vital information by forwarding this email and tell your colleagues about us.

The American Immigration Council offers free lesson plans, resources, book/film reviews, and grants to teach immigration. We also welcome teacher and student book reviews and contributions to our blog. Email us at teacher@immcouncil.org and follow us on twitter @ThnkImmigration #teachimmigration.
Posted by Unknown at 11:23 AM 1 comment:

“The United States of America is, and always has been, a nation of immigrants.” This is the first line of the “American by Belief” exhibit which opened to the public last week at President Lincoln’s Cottage in Washington, D.C. and will remain open for two years. Through a series of colorful and descriptive panels, visitors are encouraged to draw connections between Lincoln’s largely unexamined history on immigrants and immigration and contemporary issues in U.S. immigration. President Lincoln’s Cottage consulted with the American Immigration Council on the current immigration policies contextualized in the exhibit. Historian Jason Silverman’s book Lincoln and the Immigrant, provided much of the fascinating historical background for the exhibit. Notably, his book is the first in over 6,000 Lincoln biographies to recognize the important role immigrants had in shaping Lincoln’s personal and political beliefs, including his signing into law the 1864 Act to Encourage Immigration. Professor Silverman also discussed Lincoln’s immigration policy and the formation of his beliefs with the American Immigration Council’s Executive Director Benjamin Johnson who provided insight on current policies at a recently hosted event at the Cottage.

As the exhibit highlights, “Lincoln recognized immigrants as one of America’s greatest resources and its best hope for the future. He believed America offered immigrants the full realization of its founding promises and a fair chance to succeed.” One-hundred and fifty years later, many people are still arriving for those same promises and what unites us may be these indelible beliefs. 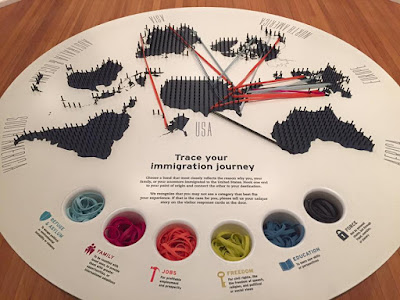 If you live in the Washington, D.C. area or are coming for a visit, we encourage you to see this special exhibit. Highly engaging, visitors of all ages can write their immigration stories, no matter how recent or distant, and visually display their journey on an interactive map. For those who can’t make it in person, you can also participate by downloading a copy of the “Tell Your Immigration Story” lesson plan which is built upon our “Crossing Borders with Digital Storytelling” lesson plan, featured in the President Lincoln’s Cottage School Programs brochure. 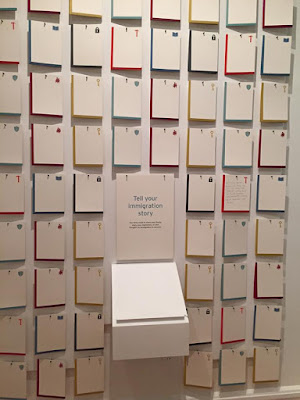 ·       Read Patrick Young’s review “New Book Examines Lincoln’s Personal Relationships with Immigrants” on Professor Silverman’s seminal book Lincoln and the Immigrant, which “at just over a hundred pages…will leave you thinking for weeks.”

·       Read our article “Teach Empathy with Digital Immigration Stories” published on Edutopia which details the connections and opportunities for student engagement and inter-cultural understandings when sharing immigration stories in the classroom.

The American Immigration Council offers free lesson plans, resources, book/film reviews, and grants to teach immigration. We also welcome teacher and student book reviews and contributions to our blog. Email us at teacher@immcouncil.org and follow us on twitter @ThnkImmigration #teachimmigration. You can also follow the exhibit and President Lincoln’s Cottage @LincolnsCottage #AmericanbyBelief.

What Are Your State’s Policies Towards Immigrant Access to Higher Education?

It’s October and many high school seniors across the country are busy preparing to apply for college, which means that teachers, guidance counselors, parents and others are also busy — helping students fill out FAFSAs, select schools, revise essays, and write recommendation letters among other tasks.  Each year, an estimated 65,000 of these soon-to-be graduated youth are unauthorized immigrant students who were brought to the U.S. as children, and who face distinct challenges from their peers when accessing college.

While guaranteed a right to public K-12 education under the 1982 Supreme Court ruling in Plyer v. Doe, there is no corresponding federal edict for how unauthorized youth are to be treated in a post secondary setting. As a result, many states have responded in diverse ways with some states allowing for tuition equity and financial aid and others barring unauthorized students from enrollment, and still others with no explicit policy governing access towards higher education for unauthorized youth.

You can find out what your state policies are towards immigrant access to higher education on this map from the National Immigration Law Center (NILC). Specific state information and context can also be found on this interactive map from America’s Quarterly.

A recent commentary on state legislation from the Migration Policy Institute (MPI) notes that “since 2001, 17 states have enacted measures that would allow qualified unauthorized immigrant youth, often referred to as DREAMers, to pay resident tuition rates at their postsecondary institutions.”  Click to read the full commentary and to view a chart of the post secondary policies for the top 15 states of residence for Deferred Action for Childhood Arrivals (DACA) youth.

Immigrants have and will continue to contribute to American public education. As our demography continues to shift, the contributions immigrants make in our communities and classrooms will help bring to light that education opens opportunities for career and civic engagement as proven by our immigrant past.  Simply put, we have much to lose in our immigrant future by not investing in the aspirations of all our students.

The American Immigration Council offers free lesson plans, resources, book/film reviews, and grants to teach immigration. We also welcome teacher and student book reviews and contributions to our blog. Email us at teacher@immcouncil.org and follow us on twitter @ThnkImmigration.
Posted by Unknown at 1:41 PM 1 comment:


As educators, one of the great joys is introducing students to fiction that allows students to see themselves in characters they thought were nothing like them and which they shared little in common. It is one of the most effective ways to teach empathy, broaden understanding, and disprove stereotypes. It is the stuff of “a-ha” moments, meaningful connections that transcend the classroom, and Dinaw Mengestu’s novels are ripe with these potential moments for high school students. His character-driven narratives highlight the universal tensions between home and displacement, loss and renewal, as explored in the migration experience.

The award-winning novelist and Mac Arthur Fellow has published three novels The Beautiful Things That Heaven Bears (Penguin 2007), How to Read Air (Penguin 2010), and All Our Names (Knopf 2014).  An Ethiopian-American, his family left Addis Ababa when he was two-years-old during a violent period in Ethiopia known as “Red Terror.” He was raised in Peoria, Illinois, the setting used in his second novel.

Of his characters Mengestu said, in an interview with National Public Radio (NPR), they are “driven for a sort of home…what I think is a pretty universal and pretty common feeling.” Never does a character seem to fully understand his or her place, what they have lost in leaving and what they hope to find in a new home.

Mengestu’s debut novel, The Beautiful Things That Heaven Bears, explores the isolation and frustration of immigrant life through the eyes of the Ethiopian immigrant storekeeper Sepha Stephanos in a rapidly-gentrifying Washington D.C. How can Stephanos ever make a home in America that he feels a part of if he has never truly left Ethiopia?

In How to Read Air, we encounter the narrator Jonas Woldemariam, a second-generation Ethiopian-American struggling with his failed marriage as he takes a road trip to understand the complicated relationship of his parents, Yusef and Mariam, who emigrated from eastern Africa. The result is four skillfully-woven narratives, Yusef, Mariam, Jonas, and his estranged wife, Angela, each telling a similar but particular story of home and loss and the struggle to belong.

The most recent novel All Our Names is set after the Ugandan independence and alternates point of view between Helen, a social worker in the Midwest, and her lover who calls himself “Isaac.” Through flashbacks, we learn of Isaac’s troubled past – an Ethiopian who travelled to Uganda via Kenya who becomes, along with a boyhood friend, drawn into military activity. While a love story, it is also a war story exploring how violent leaders rise to power and how names and identity can change with perspective and time.

While the themes in Mengestu’s novels explore the immigrant experience through unforgettable characters, they also convey universal themes. Mengestu said in an interview with German media, Deutsche Welle, “We often think that the immigrant story is unique to people who have left their homes. But for me it has increasingly become a story of people who have lost something essential to who they are and have to reinvent themselves and decide who they are in the wake of that loss.”  What student (or person) hasn’t questioned who they are or lost someone or something dear to them?

These novels give students the opportunity to explore the immigrant experience through the fresh eyes of complex characters dealing with familiar struggles. In an effort to get students to think beyond media headlines, more than anything these novels portray the human experience of immigration.

·       The National Education Teachers Association (NEA) has a free downloadable lesson plan to use with high school students along with capstone ideas and essay topics.

·       Our free lesson plan on Chimamanda Ngozi Adiche’s Ted Talk “The Danger of a Single Story” pairs well with Mengestu’s novels and lends itself to a discussion on the benefits of diversity.

The American Immigration Council offers free lesson plans, resources, book/film reviews, and grants to teach immigration. We also welcome teacher and student book reviews and contributions to our blog. Email us at teacher@immcouncil.org and follow us on twitter @ThnkImmigration.