How Educators Teach Immigration and Digital Storytelling in the Classroom

How Educators Teach Immigration and Digital Storytelling in the Classroom
In our most recent tweet chat we co-hosted on May 4th with middle school teacher Brian Kelley at #engchat, we initiated a thought-provoking, generative discussion with English and ELL teachers as well as vested learning partners on the benefits and challenges of creating digital stories on immigration with students.  Our piece “Teach Empathy with Immigrant Digital Stories” published today on Edutopia addresses some of these considerations and steps to support and share student writing of immigration experiences digitally.
In addition, we’re highlighting a few of the insights shared with us from the tweet chat that will further enhance such a classroom project to create a positive learning culture where diverse backgrounds, knowledge, and belief systems are appreciated.

Please continue to share how you use digital storytelling on immigration with us and how it can create empathetic moments for classrooms and school communities.  We’d love to hear your experiences!

We invite book reviews written by teachers or students and we offer free lesson plans, resources, and grants to #teachimmigration. Stay connected! Follow us on twitter @ThnkImmigration and our blog Immigration In and Out of the Classroom. 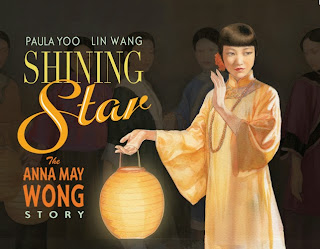 What We Can Teach and Learn From the Chinese Exclusion Act 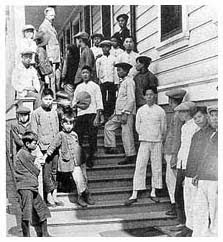 Faith, Fear, Hope, Dreams. These are some of the words etched into the memorial walls at the Angel Island Immigration Station, a point of entry on the west coast which served to both include and exclude immigrants. Individuals that passed through or were detained here included Australians and New Zealanders, Canadians, Mexicans, Central and South Americans, Russians, and in particular, Asians.

The month of May is Asian American Pacific Heritage month and it provides an opportunity to take a closer look into the bleak history of the remote, fog-shrouded Immigration Station to see what conditions allowed it to exist and to explore our current societal and individual thoughts on race and immigration. As we study its history, connections can be made in the classroom illustrating how personal beliefs lead to civic engagement and legislation that can affect us all for many generations.

The Immigration Station, set on a small island in the San Francisco Bay, was built in 1910 to enforce the Chinese Exclusion Act of 1882, the first major piece of legislation targeting a nationality. Unlike Ellis Island where immigrants were processed within hours or days, on Angel Island, many were detained for weeks, months, and even years.

The Chinese Exclusion Act prohibited all immigration of Chinese laborers. Only diplomats, teachers, students, merchants, and travelers were allowed to enter. This law was not repealed until 1943 when China was a U.S. ally in World War II.

How did this law come about? In the 1870s, an economic depression created serious unemployment problems. Racist labor union leaders directed their actions and the anger of unemployed workers at the Chinese, blaming them for depressed wages and lack of jobs, and accusing them of being morally corrupt. Because of these opinions, local and statewide restrictions continued to be enforced against the Chinese until the U.S. government passed the Chinese Exclusion Act.

In the classroom, we can use this history to ask the students what it means and feels like to be excluded. Were they ever left out of a group or activity? What did that feel like? And why do people sometimes exclude others?

The Exclusion Act was a result of attitudes driven by fear and racism to exclude Chinese from mainstream American life. Some of the underlying ideas and sentiments of the Exclusion Act are similarly and reprehensibly expressed for the discrimination experienced by other groups. Lesson two from the Angel Island Immigration Journeys created by the Angel Island Immigration Station Foundation has a complete plan for this as well as a detailed U.S. Immigration History timeline.

America is a nation of immigrants and continues to be an immigration destination for people from all over the world seeking opportunities. Yet, immigration still captures our news headlines and is cause for much heated debate. Using the history of the Angel Island Immigration Station, we can help our students develop the critical thinking and emotional intelligence to shape how Americans think and act towards immigration now and in the future.

•    Connect your historical study of immigration to the present moment by asking students to take an Immigration Status Privilege Walk, our newest lesson plan, where students learn the meanings of various U.S. immigration statuses in order to understand their ‘benefits’ and ‘limitations.’

•    For more lessons and resources to teach about the Chinese Exclusion Act, visit the Angel Island Immigration Station Foundation website and The UC Berkeley Bancroft Library’s Chinese in California, 1850-1925 Digital Archive.
Posted by Unknown at 9:32 AM 1 comment: 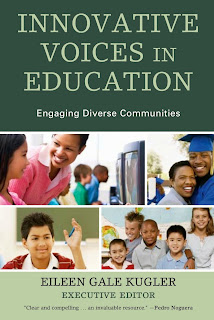 Reading these essays, one is truly inspired by what schools, and all those who learn, teach, and work in them, can accomplish when diversity is treated as an asset – something not just to be explored or discussed on occasion, but engaged in every day. Because the voices of students, parents, teachers, administrators, and community organizers speak side-by-side, chapter by chapter, as a reader, you begin to see how none of them improve the climate for welcoming immigrant students and families in isolation. Indeed, individuals and groups invested in cultivating a pluralistic school environment are highly interdependent.

Innovative Voices in Education implicitly calls on education stakeholders from teachers to administrators to reflect upon their norms and rituals and ask – how am I really meeting the needs of everyone in my class? In my school? And then it doesn’t just leave you wondering as so many other books do. It offers many examples of how powerful it is when individuals authentically reach out to understand someone from another culture they may have misunderstood and it extends best practices for meeting the needs of diverse schools in order to ensure that voices are not just heard but appreciated.  If the goal is to help every child succeed, this book helps practitioners move one step closer to it.

We’ve selected a few excerpts to demonstrate the wide-range of speakers found in this comprehensive read. The insights offered by these authors strike a balance between inspiration and practicality.

For more information about the book and Kugler’s work, please visit her author website here.

A special 20% discount for the book is available from the publisher, Rowman & Littlefield, for a limited time until June 30th, 2015. Use the promo code RLEGEN15 when ordering either by phone at 1-800-462-6420 or directly from the publisher website.

We invite book reviews written by teachers or students and we offer free lesson plans, resources, and grants to #teachimmigration. Stay connected! Follow us on twitter @ThnkImmigration and sign up to receive our newsletter.
Posted by Unknown at 9:20 AM 1 comment:

Washington D.C. - The American Immigration Council is pleased to announce that the first place winner of the American Immigration Council’s 18th Annual 'Celebrate America' Fifth Grade Creative Writing Contest is Anya Frazer from the Fred A. Olds Elementary School in Raleigh, North Carolina. Anya’s poem was chosen from among thousands of entries nationwide. Her poem describes a mixture of emotions: hope, tension, and sadness that can accompany an immigrant’s journey to the U.S. Anya writes in her poem:

A flicker of hope,

A flash blinding my endless waters,

But then it’s gone.

But as they catch sight of the golden land,

That fire begins to glow.

It spreads out wide like a seed to soil,

Its timid shoots poking out of the ground.

To read the entirety of the winning entry click here.

Inspired by her own family’s German and Irish heritage, Anya said in an interview “I feel that it is important for people to understand and think about what immigrants will do to be part of a free land.” When asked about how immigration has affected her life, Anya described how family members on her mother’s side immigrated to the U.S. in order to escape the war and how she values the German customs that are still apart of her family’s traditions.

Anya will read her poem and receive her award at the American Immigration Council’s Annual Benefit in Washington, D.C. on June 19, 2015 and it will be read into the Congressional Record.  All top six winners will have a flag flown over the Capitol.

21 Chapters of the American Immigration Lawyers Association participated in the contest. The top entry from each participating Chapter was judged by a panel of immigration experts who chose the top five entries sent to the celebrity judges.

2015 marks the American Immigration Council’s 18th Annual Creative Writing Contest, a national contest for fifth grade students. The contest provides youth with an opportunity to learn more about immigration to the U.S. and to explain, in their own words, why they are proud America is a nation of immigrants.