In honor of International Youth Day this Wednesday, August 12th, we are highlighting a unique program where student leaders from around the world raise awareness and action against human trafficking and modern slavery.  Implemented each summer by the staff at President’s Lincoln’s Cottage, Students Opposing Slavery underscores the importance of youth voice for lasting change. To read the original piece excerpted here from Abhishek Basu, a participant in the program, please click here.

For over a quarter of his presidency, Abraham Lincoln lived on an uplifting hilltop in Northwest Washington, D.C., where he made some of his most critical decisions. While in residence at the Cottage, Lincoln visited with wounded soldiers, spent time with self-emancipated people, and developed the Emancipation Proclamation. Today, “the Cradle of the Emancipation Proclamation” is open daily for the public to experience guided tours, award-winning exhibits, and innovative programs.

President Lincoln’s Cottage uses Lincoln’s example to inspire visitors to take their own path to greatness and preserve this place as an authentic, tangible connection to the past and a beacon of hope for all who take up Lincoln’s unfinished work. 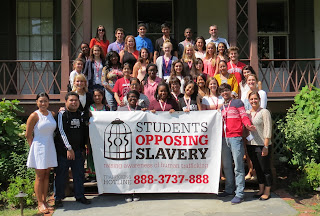 An International Youth Education Initiative
An example of our commitment to this work is Students Opposing Slavery (SOS), a youth program that raises awareness and action against human trafficking and modern slavery. 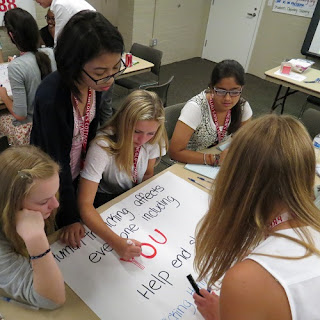 The cornerstone of the SOS program is the annual International Summit, a week-long program each June where 30 participants from across the globe engage with survivors of modern slavery, government agencies, and nonprofit organizations to identify campaigns that they will launch in their own schools to raise awareness on modern slavery and get others involved in the contemporary fight against it. Following the Summit, students remain engaged with President Lincoln’s Cottage, and each other, for guidance as they take the movement back to their own communities. The most remarkable outcome of the Students Opposing Slavery International Summit is the emergence of an inspiring, new generation of abolitionists that gives hope to the anti-trafficking cause and strengthens President Lincoln’s Cottage’s dedication to continue Lincoln’s fight for freedom.

Student Voice
One such inspiring abolitionist is Abhishek Basu. Abhi attended the 2014 Summit, and wrote about his experiences with SOS for an essay contest organized by The Telegraph (Calcutta, India) in association with Apne Aap Women Worldwide. The following excerpt is taken from his winning article, originally published on July 20, 2014. 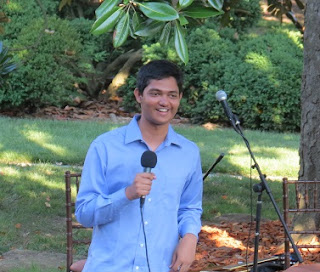 “I was one of the two fortunate people from India chosen to attend the Students Opposing Slavery (SOS) International Summit, which was a conference of young abolitionists around the world who have pledged to end modern slavery.
My heart skipped a beat when we arrived at President Lincoln’s Cottage where the conference was to be held. The place was surrounded by a burial ground for the thousands of soldiers killed in and after the Civil War. The atmosphere was electric. It was as if the ghosts of those valiant soldiers were chanting in unison and supporting our cause.

On arrival, we were taken on a tour of the Cottage. We could almost sense the presence of the great man himself. We were struck by some of the incidents of Lincoln’s life. His humility, his kindness, his dedication to his country and fellowmen and how good he was at checkers! This was the place where the Emancipation Proclamation was signed and Lincoln had once talked about his unfinished work. He understood that slavery hadn’t completely ended. Something within me felt that he was passing on the torch to all of us. For a moment there I truly believed that I had the power to impact millions of lives. A power that each and every one of us possesses.

At the Cottage, there were students of various nationalities, all united in this fight. That day made me realize the magnitude of the problem that we are facing. Human trafficking is far more than just a simple crime. A thriving 200 billion dollar industry that has its reach in every nation and culture across the globe.

The day ended for us on a high note as we did some fun team-building exercises and got to know each other. It was pleasurable to see how representatives of so many different countries became compatible with each other and after a point we were all each other’s best buddies. The discussion really got going on the second day when the students presented the problem from their country’s perspective.

The U.S., Moldova, Cambodia, Thailand, Nepal, Myanmar, Philippines and, of course, India, each had a different perspective to add. Next we had a presentation by the MTV Exit Youth Leaders. MTV Exit is an organization that spreads awareness about human trafficking through music. Since music is one thing that is universally loved, it forms a great medium to foster awareness among people. This idea really excited me.

The next few days passed by like a whirlwind. We had speakers from various organizations address us.

What really impacted me was the account of a survivor named Poonam. She was 12 when she was trafficked from Nepal into India. Condemned to work in servitude in a brothel in Mumbai, Poonam managed to escape during a police raid. She is now 18, studies in Class X and dreams of becoming a social worker. She is a living testament to the fact that survival was possible. That we don’t have to cling on to the trauma of our past.

If there’s one thing I learnt from this trip, it is inspiration. The thought that I can make a difference. I left knowing that my journey had just begun.”

President Lincoln’s Cottage is a nontraditional “museum of ideas” that takes an unconventional look at Lincoln and engages our audience in groundbreaking scholarship and historical debates over human rights and cultural issues of relevance today. For more information, visit www.lincolncottage.org.

The American Immigration Council offers free lesson plans, resources, book/film reviews, and grants to #teachimmigration. We also welcome student reviews and contributions to our blog. Email us at teacher@immcouncil.org and follow us on twitter @ThnkImmigration.
Posted by Unknown at 10:08 AM