Just weeks after the tragic events of 9/11, Rais Bhuiyan was shot in the face by a white supremacist, who at that time called himself “the Arab slayer.” That fateful day would not only lead to Bhuiyan’s journey to rebuild his own life, but it would also help unexpectedly to build a better world.

The man who shot Bhuiyan was Mark Stroman, who confessed to shooting Bhuiyan, as well as killing two other South Asian workers; for which he was sentenced to death. Bhuiyan survived, but with the use of only one eye and he still carries 35 shotgun pellets embedded deep within in his face. Many wouldn’t blame him if he were to respond to Stroman’s misguided actions with hate and anger. However, Bhuiyan chose to take the high road instead, mounting an aggressive campaign to convince Texas authorities to reduce his assailant’s sentence from death to life in prison.

Bhuiyan worked tirelessly to save Stroman’s life with pleas for clemency that in 2011 reached the U.S. Supreme Court and even met multiple times with his attacker to get to know him as a human being. Though Stroman was executed, Bhuiyan continues his World Without Hate campaign to promote healing, compassion and forgiveness.

Anand Giridharadas, a reporter with The New York Times and author of  India Calling, wrote The True American: Murder and Mercy in Texas (2014) which chronicles the lives of Bhuiyan and Stroman, showing how their lives intersected prior to and beyond the tragedy. 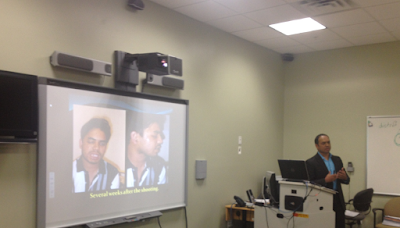 Although the book may not be appropriate to assign to students in an academic setting (because of some adult situations and violence), it is a powerful read and one we recommend to educators.  We recommend that teachers inspire their students to learn more about Bhuiyan and his organization World Without Hate, as well as his youth programs focused on empathy leadership training and compassion in action.

His story has many layers that students can learn from and resonate with.  So many people around the world have been touched by Bhuiyan’s story.  He has delivered his inspiring message not only to journalists, but also to political leaders in Europe and the United States.  According to Bhuyian, his continued efforts to educate youth are probably the most powerful.  Recently we spoke with him and he said "I look at the young faces of the students I speak to, and I think that they have not yet learned to hate. If we can reach them with our message of acceptance and forgiveness before they learn a different code, we might really make a difference."

Recently The American Immigration Council had the honor of working with Bhuiyan, who also received the Council’s American Heritage Award in 2014, at a professional development workshop on Long Island.  As a presenter, he had the audience captivated and his powerful message inspired teachers to share both his and Stroman’s stories in their classrooms.   His presentation made educators truly realize their power in making students relate to others and think critically about difficult situations. Bhuyian understands that educating our next generation is critical and he is committed to teaching others the regenerative power of forgiveness and how this concept can be incorporated into anyone’s life.

To learn more about Rais Bhuiyan, visit World Without Hate.

Suggested activity:  Rather than assign the book have students view the TED Talk  The Tale of Two Americas and the Mini-Mart Where They Collided (20 minutes) with author Anand Giridharadas and start a discussion based on the talk.

If your school is interested in professional development opportunities, please contact Claire Tesh at ctesh@immcouncil.org
Posted by Unknown at 2:04 PM