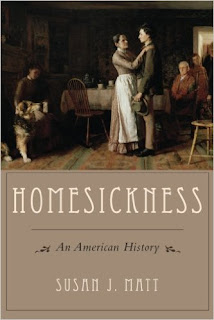 In a nation that’s been around for over 200 years, a surprising number of Americans still trace their ancestry to the countries where their families immigrated from before they came to the U.S.  Among the many persistent myths of U.S. immigration, is the one of eternal optimism and relentless enthusiasm despite the hard work and formidable distances from home.  Yet few likely consider what their ancestors went through emotionally when leaving behind their birthplace and all things familiar to them to make a home in the United States.  Historian Susan J. Matt discusses this in her book Homesickness: An American History. Matt chronicles how Americans from the early settlers to the present have long missed home – even as, in more recent centuries, they encourage dismissing this feeling of persistent longing.

Matt documents how the reception of the word “homesickness” has fundamentally changed, not even coined as a word until the eighteenth century.  Before the seventeenth century, the word “nostalgia” did not even exist, but through well-documented accounts throughout the book, one can read the painful emotions of longing and sadness associated with the term as we know it today.  As one migrant, Enos Christman, described in a letter to his fiancée written in 1849 as he traveled from Pennsylvania to California:

My feeling and emotions on leaving my friends and my native land can better be imagined than described. I left all that is near and dear and turned my face toward a strange land, expecting to be absent two or three years hoping in that time to realize a fortune… Often memory carries me back… and were I of a desponding temperament I should wish myself back again… (63).

Though he had no word for it, what he was experiencing was homesickness.  As the perceptions of rugged individualism, ambition, and enterprise increased, so did the accounts of homesickness.  These declarations became so widespread that doctors began to take note of it as a serious medical condition plaguing soldiers and civilians though they were uncertain as to how to regard and treat it. Some were compassionate while others viewed it as a sign of moral weakness particularly contemptible in men.

By the time large waves of immigrants came to the U.S., homesickness was a concept largely recognized as part of the travails experienced in immigration. Matt notes that “between 1871 and 1920, 20 million immigrants journeyed to America” (141). The inventions of the steamship and the international railroads along with poor economic opportunities in home countries hastened the increase in new arrivals. According to Matt’s research, many expected to return.  Some did, but for others returning was not an option if it meant returning in shame or if they simply could not afford the return fare. Despite harsh labor conditions, many immigrants thrived in America starting businesses of their own, and as Matt notes, starting families of their own which helped to overcome their longing and establish America as a home (151).

But as the modern industrial economy developed and technology has enabled frequent, cheaper, and faster communication among families, Matt finds that to speak of homesickness has become taboo, even disgraceful, going against the grain of perceived advancement. Those who remain at home are thought to lack drive, curiosity, and an entrepreneurial spirit. Excessive coddling and helicopter parenting are discouraged. All this to say, that despite the advances in the 20th and 21st centuries, homesickness cannot be stamped out, easily eradicated. As Matt writes “born of mobility and modernity, this sense of not quite being a native of anywhere was to be increasingly the norm for Americans, both immigrants and native-born” (175). The grass is always greener somewhere else. In fact, from the perspectives offered in this book, homesickness is a part of the American identity, a human experience uniquely tying us to each other from those who recently arrived to those who arrived 200 years ago.
Reading this book, one is impressed by the sheer amount of documentation that suggests how far we have come and continue to travel as a nation to feel at home. Homesickness as a concept and emotion doggedly persists, and as it does, it connects us to our distant past and present, and in that way, gives Americans a sense of common home not in spite of, but precisely because we are a nation of immigrants.


We offer free lesson plans, resources, book/film reviews, and grants to #teachimmigration. Stay connected! Follow us on twitter @ThnkImmigration and our blog Immigration In and Out of the Classroom.
Posted by Unknown at 11:32 AM