Recently, I excitingly told my young daughters we were going to wake up early and go berry picking at a “pick your own” farm. My three year old exclaimed “I don’t want to pick berries at a farm I want to pick them at a store.” Although it was funny, it made me realize how disconnected we are as a society to our food sources and the nameless people who make it possible for us to have fresh fruits and vegetables on our tables.

The stereotype of a farm worker is an adult male, but according to the National Farmworker Ministry, there are up to 500 of children and teens (under the age of 18) hired as farm laborers in fields across the United States. Many of these young people are undocumented immigrants or are part of migrant farm working families. Unfortunately, most of these hardworking people go unnamed and unnoticed.

Migrant farm workers often follow the crops to sustain employment and many of the children of migrant workers go to school during the day and work several hours as well.  This lifestyle can be very disruptive to students because they move several times a year and go from classroom to classroom often not bonding with teachers or other students.  One child of migrant farmers influenced by the lifestyle and work ethic instilled by his parents was Juan Felipe Herrera, a poet, performer, writer, cartoonist, teacher, and activist, who in 2015 was appointed as the nation’s first Chicano poet laureate.

Two of Herrera’s books that depict the life of young migrant workers and the children of migrant workers are Calling the Doves/El Canto de Las Palomas (1995) and The Upside Down Boy/El Niño De Cabeza (2000). Both books are bilingual and are appropriate for elementary-age children and above. 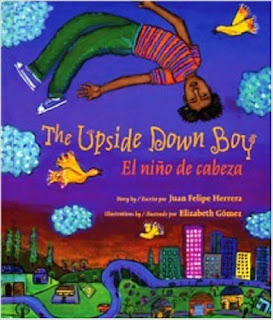 The Upside Down Boy is a memoir of the year Herrera’s migrant family settled down near San Diego, California in order to allow him to attend school for the first time. Juanito is overwhelmed by the new school, and he misses the “campesino” way of life. Everything he does feels abnormal and makes him feel upside down. He doesn’t synch with the routine at school and when he tries to speak English, “his tongue feels like a rock.” Eventually he is able to find his voice through poetry, art, and music, with the help of a patient teacher and his supportive parents. Herrera's choice of words and the accompanying illustrations by Elizabeth Gomez tell a very important story about feeling “upside down” in a new situation in a way that young children can relate to and older students can use as a starting point for a deeper, empathetic discussion. The book was dedicated by Herrera to his third grade teacher, Mrs. Lucille Simpson, who inspired him “to be a singer of words, and most of all, a believer in [his] own voice.” 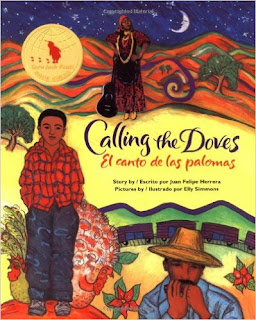 Calling the Doves won the Ezra Jack Keats Book Award, an award that celebrates and inspires exceptional new writers and illustrators, who are seldom recognized in the early stages of their careers when Herrera was not well known and new to the children’s book circuit. The book bravely tells the stories of migrant workers, their struggles and their stories of travel, life on the road and random opportunities for work. The poetic vignettes and accompanying illustrations capture the unique culture of migrant workers from the point of view of a young boy. Like Upside Down Boy, this book is an excellent resource to discuss migrant workers. Herrera dedicated this book to Cesar Chavez to honor his work with United Farmworkers Union and to his parents who taught him that “inside every word there can be kindness.”

We offer free lesson plans, resources, book/film reviews, and grants to #teachimmigration. Stay connected! Follow us on twitter @ThnkImmigration and our blog Immigration In and Out of the Classroom.
Posted by Unknown at 6:18 AM